A month ago, with spring break approaching I booked a 3-night stay at a resort on Minnesota’s North Shore. At least once a year I go on retreat, alone. Usually I stay at a small cabin in the woods—rugged, no television or amenities. This year I wanted a bit more luxury. I wanted the option of staying in bed all day on a comfy, king size bed, with the fireplace on, watching satellite television. I also wanted the option of stepping into a whirlpool bath, full of bubbles and lit candles. I brought 4 books, 2 magazines, my laptop and iPad. I also brought my homework just in case and the notes of my memoir that I’ve been working on and thinking about for ten years. The difference with this retreat, I didn’t care if I even opened my backpack with all of those options inside. As I said, staying in bed was also an option. 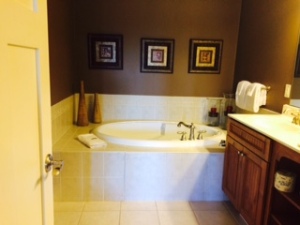 However, yesterday I decided it would be nice to hike. I drove to mile marker 43.5 along the Superior Hiking Trail. I parked at a wayside. I wore my knee-length, down North Face jacket; my green, rubber, ankle-high rain boots and my cross-body leather purse. I also had a scarf and hat to match. On the brochure from the resort, the hike was listed as 5 miles. After, crossing the bridge at 2.5 miles, it read I would be led back to the wayside. How difficult can 5 miles be? That’s like walking Lake Nokomis two times around. It turns out 5 miles on a hiking trail is equivalent to about 20 miles on a paved trail around a lake, at least in my estimation. 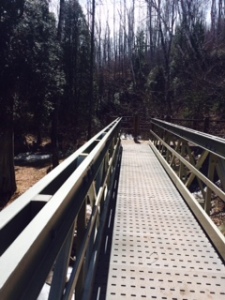 I was met with many obstacles upon the trail. The first being a couple on the path that I kept trying to avoid, which was difficult because they kept stopping. The first stop was to set down their backpacks and strip off their oversized coats, rolling them neatly into their backpacks and putting on a lighter coat. I decided to follow suit. But, I had no backpack so I folded up my bulky winter coat and hung it over my purse. Their second stop was to take a drink of water and eat a snack. I had no water. I had no snack so I sat on a tree stump and watched the waterfall. Their third stop was to tie their hiking shoes. I had rubber rain boots. Fourth stop—kiss on the bridge (that wasn’t the one to cross over to head back as I hoped it was). My husband hates to hike so we will never kiss on a bridge if it’s on a hiking trail. And finally, their last stop at the actual bridge, which was the half-way point, at a camping site, where I watched them unload their gear. This, is where I started to worry. Should I be camping out? Is the hike back not possible without an overnight stay? As much as I tried to avoid the couple I was now afraid to leave them behind.

I checked my phone. Up until this point I had no signal, but now I had two bars. I sent my husband a text informing him of my location. You know, just in case I don’t make it. Because you see, prior to this I was really struggling. On the trail to the bridge was mud, lots of mud. And ice. My rubber boots are not made for ice. There were steep slopes up and down filled with ice and mud. I had to find other ways around, if possible. Sometimes this wasn’t possible because to my right was a ridge and then the river and to my left trees and brush and prickly branches. At one point, I took a tumble, and cursed loudly.

So I wrote: Ok so if you don’t hear from me I’m on the split rock superior hiking trail. First signal I’ve had and it’s full of mud and ice and I’m not prepared for that. Then another text to say, I am still only half way. I’m the stupidest person I know. He replies: Are you going forward? I say, Have to. It’s too bad to turn around. I’ve already fallen. Then he says, I wish you well with that. Better person than me.

Wish you well with that….? I could break a leg or twist my ankle next time I fall.  I’ve seen animal prints I hope are domestic dogs and not wolves or bears. I have no water or food. I don’t know how long it will take for me to get back. I don’t know if the trail back is full of mud and ice. I don’t even know if I am following the right trail. And, that couple I wished would go away are now behind me, camping for christ sake. And, I’m telling him my location in case any of this happens. And, he says, I wish you well with that. 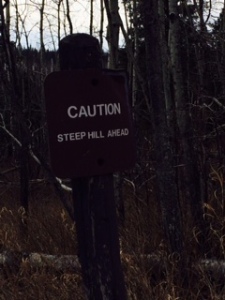 At this point, I never thought the trail would end. Four hours had gone by. There was no end in sight. All I wanted was to get back to the resort for my $5 smoothie before they stopped selling them at 4pm. I wanted the hot tub and the cozy bed. I cursed the path and then cursed myself for taking myself out on yet another stupid adventure where I don’t feel prepared. Where I get swindled by my own mind to have an experience, where all I do is realize I just want to be at home, relaxing. Where I understand I really don’t want to work so hard. I don’t want to be challenged by miles of mud and ice and rocks and tree roots and a husband that doesn’t get it. Then, I began to hear traffic from Highway 61. I was up high enough I could see glimpses of Lake Superior. Signs, I knew, I was going in the right direction.

Did, I even feel relieved or heroic upon retuning to my car….? No. As soon as my tired, aging, aching body got into my car the experience was already becoming a distant memory. I was in the moment of now being in my car, in pain. I’ve gone most my life holding onto experiences and making them mean something. But, do they? I’ve also made sure I learned something. But did I with this experience? If I did, I learned I am not as tolerant or interested in being challenged as I think I should be. Or maybe I am just tired of being challenged and just want to relax and take it easy for a while. Maybe I just went for a damn hike- and as with most things it wasn’t what I thought it might be. End of story. And, I have the boots to prove it.

One thought on “The 5-Mile Hike”

© Copyright by Nikki DiVirgilio, all rights reserved 2005-2019 All writings here are copyrighted by Nikki Di Virgilio. You may not use them without written permission but you may link to the posts or give out a link to the posts.
Loading Comments...
%d bloggers like this: