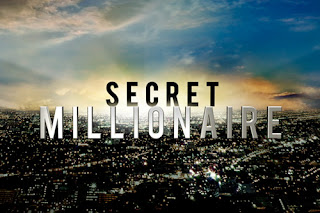 Just when I thought I couldn’t take one more reality show, Secret Millionaire reveals an entirely new expression of reality television.  I first “met” Dani Johnson, the first millionaire who goes undercover in an impoverished neighborhood, on The Oprah Show.  Dani, who at 21 was homeless, began a business in the trunk of her car, making her a millionaire two years later. Her mission on Secret Millionaire: to live in a community outside of Knoxville, Tennessee and find people there, making a difference. The secret: no one knows she’s a millionaire.

The first people she meets, are Helen and Ellen. Two twins that make your heart smile- instantly. They run The Love Kitchen, where they feed and clothe the homeless and unemployed.  This Oprah episode touched me, but I wasn’t sure I’d tune in.  But, I’m glad I did. It isn’t often television, especially reality shows inspire me, at least inspire me enough to want to get up off my couch and REALLY make a difference, but this show has heart.  Lots of it, and I’m impressed for many reasons.  Where do I begin?

I’m sure you have noticed the manipulative drama on many reality shows, even on shows like American Idol.  The music playing along with the snide expressions. The exaggeration of events and conflicts. How refreshing then, to watch a show that is drama-free. A show about humanity, at its best.  Also, a show about communities at their worst.
Today, I saw hope. ~Dani Johnson
In the beginning of the first episode of Secret Millionaire, we see Dani driving through Western Heights.  It is a town full of abandoned buildings, and schools no longer teaching children.  It is a forgotten neighborhood, and it shows on the faces and behaviors of  some of its residents. Drugs and prostitution infiltrate its abandoned state. Seeing communities like this is as important as seeing the generosity, which comes later.  Perhaps, a side-benefit of Secret Millionaire is to expose the dark corners of our country and bring to light what happens when the people feel impoverished and abandoned.
In the meantime, Dani discovers three organizations shedding light in creative, loving ways.  The first, are those gracious sisters, Helen and Ellen in The Love Kitchen. They live by their father’s teachings: “There is one race- the human race.”  And to leave the last piece of bread because you never know if someone is going to need it.  And plenty do, and they feed them well. Dani, also discovers The Joy of Music, a program providing a space for children to explore and nourish their musical talents. The third organization is, Special Spaces. They design dream bedrooms for children who are sick.
Dani is touched, moved to tears often by the stories, some of them allowing her to heal some of her old wounds.  There are so many facets to this series. Almost too many to mention. There is a transformative power for the giver and the receiver and all of those present, including us, the viewer.  It’s about seeing everyone, not just the celebrities, the rich and affluent. It’s about hearing everyone’s wisdom and stories, not just the educated and the “experts” in their fields.  The show made me realize, we ALL deserve time, attention and love. As Dani says, “We idolize all the wrong people.”
I hope that this series equalizes us. I had a bit of money for a while, and one of the lessons I learned, is with money, it’s easy to buy a world you can create that is comfortable.  It’s nice, but isolating.  If you feel a little guilty for being a “have” versus a “have not” you can write a check and go back to your comforts. However, this series shows how we can level that playing field.  We can get out there and get our hands dirty, expand the “millionaires” world and find real connection.  Begin to see everyone as one, not separate or less than. We see that everyone, as the twins said, has the power to “put a spark” in each other’s hearts.
At the end of Dani’s week, I loved watching her sign her own checks to give to each one of the organizations where she volunteered.  100K total. What satisfaction that must bring. As she handed each one a check, I could feel not only their gratitude, and of course shock, but the relief of years of carrying such a responsibility. Of giving such an effort for others, risking everything for a mission, and to finally be seen, recognized and rewarded.
I love this show. I believe it shows us a new reality. A more generous, real, down to earth reality, where we understand we have the power to make a difference, if we just as Dani said, “Get on the ground, and give what you got.” And we don’t have to be millionaires to do it.
Tune in, Sunday March 6 and be a part of an inspiring movement of awakening, compassion and heart.
To see the trailer, and for information on the series, the millionaires, the charitable organizations and how you can get involved in your community, visit the ABC, Secret Millionaire site.

One thought on “>Review: Secret Millionaire”

What I share here are moments. There are truths and illusions.

This is my way of capturing the moments and the process of my life.

Thank you for visiting.

© Copyright by Nikki DiVirgilio, all rights reserved 2005-2019 All writings here are copyrighted by Nikki Di Virgilio. You may not use them without written permission but you may link to the posts or give out a link to the posts.
%d bloggers like this: